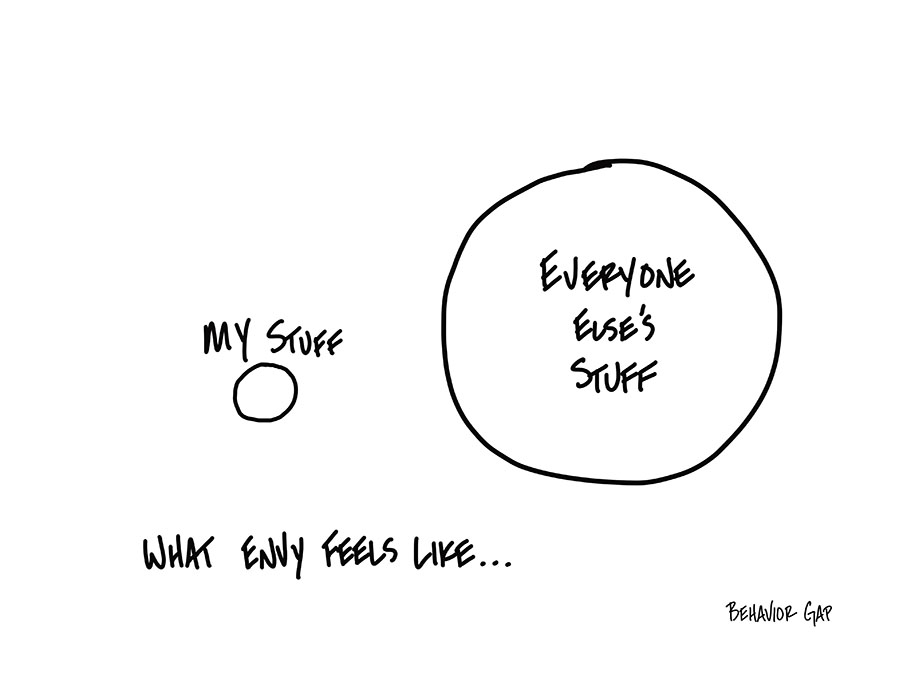 It’s hard not to get a bit overwhelmed by how much better everyone else is at so many things than me. And we all know what immediately follows a feeling of hopeless inadequacy: envy.

Now that we all spend countless hours on social media, it seeps into seemingly every aspect of our lives. And nowhere does envy raise its ugly head more than with money.

When I think about envy, I think back to an op-ed in The New York Times way back in 2014 that opened with this line: “In my last year on Wall Street my bonus was $3.6 million — and I was angry because it wasn’t big enough.”1

Stop and think for a minute about the envy behind this statement. Something good happened to this guy, but in his mind, it wasn’t good enough because he knew there were other people who received more. Who gets a $3.6 million bonus and gets angry about it?

Well, probably the kind of person who compares themselves to anyone who seems to have more than they do. AKA, all of us.

It’s easy to get angry at the Wall Street bro and ignore how we are guilty of the same exact feelings of envy. But just look at how we engage on social media. We’re constantly focused on making it look like we have a better life than everyone else. But even as we take our own pictures and apply filters to our world, we’re flipping through other people’s photo streams and feeling envious of what we see. It’s a hard cycle to break.

The interesting thing about that op-ed is that it didn’t finish the way I expected it to. The ex-trader eventually realized that his envy and addiction to wealth were hurting him, and he left his job. The decision didn’t come easily. He feared walking away from the life he knew (and the seven-figure bonuses). But luckily, he found a way to break the cycle of envy and discovered what actually made him happy. And it turned out it had very little to do with what the guy next to him earned as a bonus.

In fact, it turned out that, for him, it had everything to do with learning how to believe that he had “enough.” On Wall Street, the idea of “enough” simply didn’t exist. It was like a fairy tale or a story for children. Again, this isn’t just the case on Wall Street. The experience of feeling like you never have “enough” describes social media to a T. You know this is true. As you endlessly doom scroll, how often do you see a picture and think: “If I only had a little more money… If I only had a better body… If I only was better at [Insert Extreme Sport Here]…”?

Let’s say all those things happened. Then what?

There will always be something else we don’t have that someone else does, and our envy becomes a trigger for all the bad behavior we’re supposedly trying to avoid.

After all, it’s really hard to focus on saving as much as we can and sticking with our financial strategy if doing so gets in the way of having what we think we want right now.